Testing Has a Point of Diminishing Returns

I don’t imagine it’s a stunning revelation to say testing has a point of diminishing returns (which isn’t to say testing is not vital, even central to software development). This is what I’ve come up based on my experience – hopefully someone out there can point me to more official research: 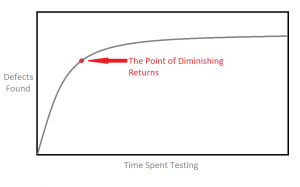 Note that there is a geometric progression here. The first few defects do not take very long to find. Then it gets harder and harder to find more defects. Bugs 1-10 might take you an hour. The 100th bug by itself might take you 10 hours.

Where exactly the point of diminishing returns lands on this curve depends on a bunch of things of course. First and foremost would be if there are any lives at stake. For example, if you’re testing body armor for the US military, you would think it would be quite a ways up and to the right. (Evidently though – it’s not.) In software, medical applications that could result in someone’s life being saved might qualify.

Next might be money issues, such as banking applications. You wouldn’t want to go live with a beta version of software that, for example, manages bank accounts, account transfers, and the like. (These people know that now.)

Most Web applications on the other hand are a little to the left of the far-right edge of the chart. No one is going to live or die if someone can or cannot post a MySpace comment. Ecommerce applications such as SoftSlate Commerce do have to deal with money, and so – especially those parts of it involved in payment transactions and the like – should rightfully take special attention.

But besides how mission-critical the code in question is, there are other factors:

You might think it’s professional negligence to say all this about testing – that one should always strive for perfection, zero defects, in which case the above factors shouldn’t matter. Our time, and our clients’ money is too valuable to waste it testing to an extreme. Yes, our clients deserve excellent software, but they also deserve us to be smart about how we achieve it. For example, a couple of the most cost-effective testing techniques we do regularly include parallel ops and automated functional testing. Those are good ways to catch more defects without going beyond the point of diminishing returns. With the time left over, we can make the software better in much more certain, tangible ways.

I'm a web developer and consultant based in lovely Schenectady, NY, where I run SoftSlate, LLC. In my twenties I worked in book publishing, where I met my wife. In my thirties I switched careers and became a computer programmer. I am still in the brainstorming phase for what to do in my forties, and I am quickly running out of time to make a decision. If you have any suggestions, please let me know. UPDATE: I have run out of time and received no (realistic) suggestions. I guess it's programming for another decade.
View all posts by David Tobey →
This entry was posted in Deep Thoughts, Programming, Web Ops. Bookmark the permalink.

9 Responses to Testing Has a Point of Diminishing Returns